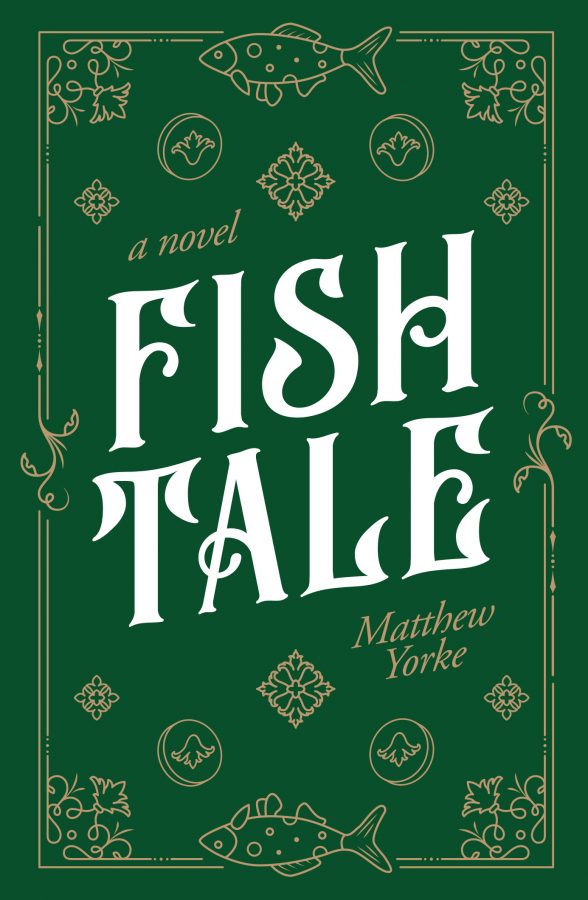 "As beguiling and uncatchable as a dream, Fish Tale is like a fairy-tale with fins."

"A most unusual page-turner. Beautiful and haunting. I was gripped throughout."

It goes without saying that man cannot live by bread alone. That to lead a sober and meaningful life we must submit to a Higher Authority, always endeavouring to exist not in isolation, but in harmony with our fellow man. Yet this conviction alone has never been sufficient to lift my compulsion to act rashly. 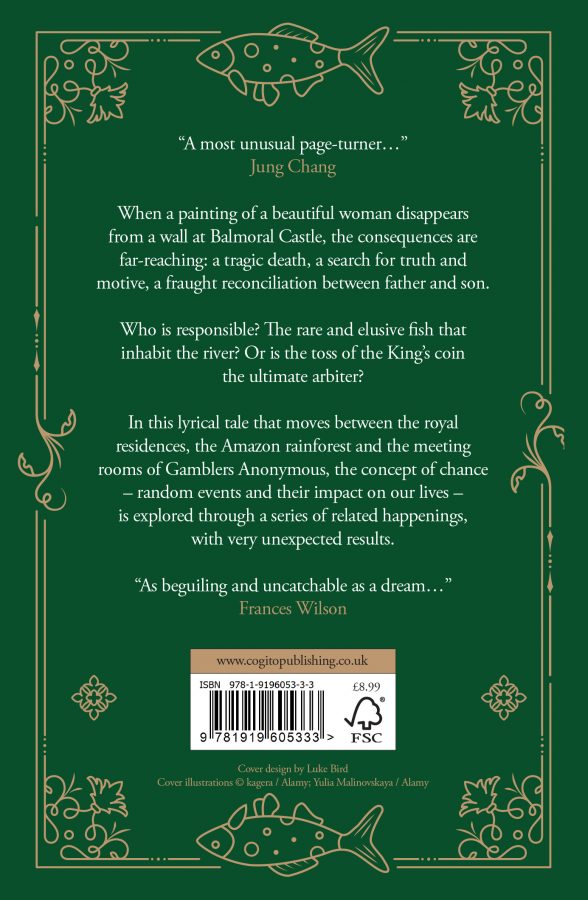 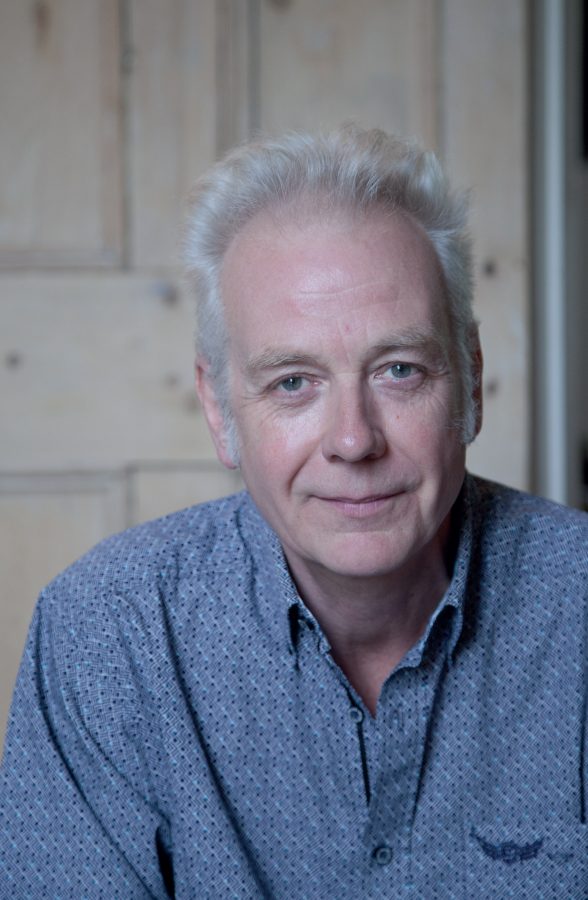 The period leading up to the royal family’s arrival at Balmoral for the summer vacation was always a time of great stress for Nick Winter, head ghillie on the castle’s four beats of the River Dee. Would the royal party enjoy good fishing? Or wouldn’t they?
“You’re to stop this fretting, Nick,” would be his wife’s continual refrain as the day approached. “What use can come from worry? Tell me that?”
“But what if they don’t catch fish, Angela?”
“That’ll not be your fault!”
“What happens if there aren’t any fish?”
“Not your fault again!”
Angela was right. The Dee wasn’t the only river to suffer a decline in salmon numbers over the past half-
century. And this in spite of efforts to prevent too many fish from being netted at the mouth of the river at Aberdeen; and targets to apprehend poachers, in places like Aboyne and Potarch, being well exceeded. Yet still fewer and fewer fish were caught on the castle’s beats. Some said it was down to pollution; others blamed disease.
In truth there was very little Nick could do. It would take a brave man to poach fish from the castle’s water, so night patrols with a lamp were for the most part uneventful. His main jobs, then, were control of the redds, the salmon’s spawning grounds, and upkeep of the riverbanks, shoring them up in areas where they had been spate-damaged. As well as more mundane tasks: maintenance of the piers from which members of the royal family and their guests actually stood when angling, for instance. Could the boards take the weight of a seventeen-stone man? Were they adequately covered in chicken wire, which would prevent anyone from slipping in wet weather?

In moments of stress like this Nick might be visited in his dreams by a lady in white, whom he called Freya. Nothing would ever actually be consummated in these dreams; nevertheless they had definite erotic undertones. Freya would be by an open window, a breeze billowing a gossamer-thin gown. Through it you could see the shape of her breasts, which to the touch would be of untold softness.
Nick welcomed these encounters. Freya seemed to be telling him that in the grand scheme of things all his worries were but naught. That when the final Day of Judgment came it wouldn’t matter a fig whether or not the royal party caught a fish. Indeed, waking from a dream of Freya, his only thought: What an extraordinary apparition this nymph in white. How reassuring to have finally encountered something so real!
His only regret was that Freya wasn’t a complete stranger. The fact was there was a picture of her at the castle. Not inside the castle proper, but outside the rod room door, which was situated close to the servants’ entrance. In the picture Freya was standing by a window, her head thrown back as she smiled into a starry sky. Her hair was long, way down below her waist, but not so arranged as to obscure her legs and hips, which were pearly-white and clearly visible through her veil-like gown. The picture, Pre-Raphaelite in style, was framed in black lacquered wood and was about the size of an extra-large letterbox stood on end.
An inscription on a white band held by two nails, read: UNTIL WE MEET AGAIN.

Of course Nick never spoke of Freya to his wife, although Angela may well have suspected he met someone in his sleep, as sometimes he would awake from his dreams very aroused. In truth she welcomed this someone, as she enjoyed making love.
“Another hard Winter,” she would whisper playfully in his ear.

The day of reckoning finally came.
The royal party had arrived by train four days previously, and later that morning Nick was to meet the King and a guest at Otter’s Hole, the pool the King always opened the season with. There had been some heavy rain during the week, with reports of fish moving through the system.
And Freya had visited, too. In fact Nick had awoken with a glow that seemed to emanate from the very core of his being.
“There, now,” Angela said to him, handing him his piece box at the door, “see how you are a different man when the time comes.”
“I know,” he had to quietly concede.
“Cometh the hour, cometh the man.”

Nick reached Otter’s Hole well ahead of the royal party. The water might have been the colour of beer, but if the rain held off it would fine down well during the course of the day, he knew from experience. In fact fishing conditions looked decidedly promising. First he baled out the boat and fixed the rowlocks. Then he swept the pier as thoroughly as he might sweep his own sitting room floor, pushing off any detritus into the boiling water.
Presently the King arrived. He was wearing a green tweed suit and a rust-coloured tie. He was smiling broadly, as he enjoyed his fishing.
“Good morning, Nick,” he said, shaking his ghillie warmly by the hand.
“Good morning, Sir.”
“I’ll fish from the boat to start with, and Lord Embers will fish from the bank. Then we’ll swap over at lunch. What do you think about that?”
The King always spoke in this way, which was meant to put his staff at ease.
“Very good, Your Majesty,” Nick replied.
Nick doffed his cap to Lord Embers and shook him lightly by the hand. Lord Embers was the King’s private secretary, and Nick had ghillied for him on many occasions in the past. He was a heavy man with heavy features. And quite often when it was his turn in the boat he would curse as he tried to find his feet on the swell. But only, of course, when well out of earshot of the King.
Once Nick had loaded the boat with the Sovereign’s tackle and once he was sure that Lord Embers was not in need of any further assistance, he helped the King embark. Then they set off towards an island of sun-
whitened stone.
“So, Nick, how are you?” the King asked him.
“Very well, Sir.”
“And Mrs. Winter?”
“She’s well, too, Sir.”
“I’m afraid everyone seems a little out of sorts in London at present.”
“You’ve not been poorly, I trust?”
“Oh good heavens no, I’ve been champion,” the King stressed. “Only,” he paused before continuing: “Tell me, Nick, do you have any godchildren?”
“I do, Sir.”
“And how many, may I ask?”
“I have two goddaughters, Sir.”
“Very nice, too. But do you know how many godchildren I’ve got?”
And when Nick didn’t ask, the King told him:
“Sixteen! Did you hear that, Nick? Sixteen!”
“That’s quite a number, Sir.”
“And still counting!”
“That is quite a number, Sir,” Nick repeated.
“But how to stop people asking? And how to decline? Those are the questions,” the King sighed.

All morning they fished the swim on the lee side of the island and had drawn a blank. Until a few minutes before lunch the King hooked a small grilse. Nick had seen many fish taken at this place, where, like a seal’s snout, a boulder broke the surface of the water, so it was no surprise to him to see the Sovereign’s line tighten.
“We’re in!” the King shouted.
It was an enormous relief to Nick that the King had hooked a fish, and as he kept the boat steady against the current, he found himself praying to Freya. “Don’t let the fish get away . . . please, Freya!”
She didn’t; and after what turned out to be a lively contest the grilse was in the boat, its spade-like tail slapping the boards beneath the King’s feet. The Sovereign always dispatched his own fish, which he accomplished with a silver priest.
“What a beauty!” he marvelled.